I may have completed the last blog a bit early!  It was entitled Goodbye 2021 and was a review of how awful 2021 was for many of us, particularly Faye and me.  I assumed the remaining two weeks of 2021 would be less disappointing, but that was not the case.

2021 ended with yet another school-related issue that required a great deal of diplomacy, negotiation and contending with the bureaucratic jungle of the Department of Education.  Not that any one person can be blamed, but it can be very difficult to get people to think outside of the established status quo.  Somewhere along the line there must have been a memo prohibiting people from challenging the narrative, but I must have missed that one!

Then, as we neared Christmas Day, I received more disappointing info about a very dear friend, followed a few days later with news of his passing.  The iconic, legendary Ted Byfield died on December 23 at the age of 93. 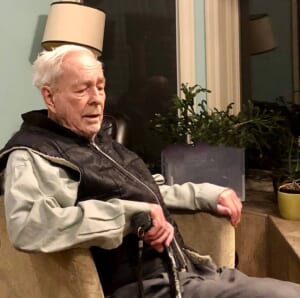 It is not likely that many of you know this man, as his greatest contributions were made when many of you were either very young or not yet “residents” of planet earth.

It would take a book to do justice to Ted’s life’s story, so I will mention but a few highlights here.  Among many things, Ted was first a journalist. One of the best, in my opinion.

Ted was not always a Christian, but once he found the Lord, his life became one of service.  He founded three Christian boys’ schools where good old-fashioned expectation for academic excellence was mixed with a generous dose of proper discipline, all towards the goal the creating solid, thinking, Christian citizens.

Ted was the man behind the Alberta Report, a news magazine that was the major catalyst behind the Reform Party. That party eventually morphed into the Alliance Party and then the Conservative Party through which Steven Harper became Prime Minister from 2006 to 2015.

Ted was the architect of two encyclopedic projects which used a journalistic approach to describe historical events. The twelve-volume “Alberta in the 20th Century” series was started in 1991 and completed in 2003, followed by a summary volume in 2005, in celebration of Alberta’s 100th anniversary as a province.

In my view, Ted’s greatest contribution was the Christian History Project which documented the impact of the Christian faith in the two millennia following the crucifixion of Jesus Christ.  Three decades in the making, it was completed in 2013.  Ted always believed a knowledge of history was a requirement for sound future planning, and I simply cannot make a higher recommendation for a Christian home education social studies/history program than those two series.

Faye and I have known the Byfields for years.  Ted was like a dad to me; he was a mentor and a friend.  We are so very thankful to have had the opportunity to share dinner with him and his family exactly one month before he went on to receive his reward, no doubt for a job well done.  We shall surely miss him.  Edward Bartlett Byfield was born July 14, 1928 and died Dec 23, 2021.  May he rest in peace.